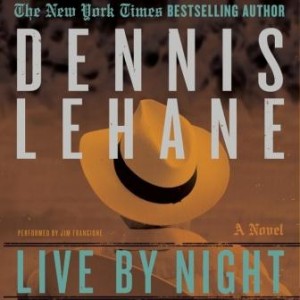 Thoughts on Live by Night by Dennis Lehane

Live by Night is the third book by Dennis Lehane that I’ve had the pleasure of reading. A few years ago, after I read my first Lehane novel, I mentally put his whole backlist on my List of Books to Buy, so when Live by Night was published, I was thrilled to be given the opportunity to review it on audio. Here’s the synopsis:

Boston, 1926. The ‘20s are roaring. Liquor is flowing, bullets are flying, and one man sets out to make his mark on the world.

Prohibition has given rise to an endless network of underground distilleries, speakeasies, gangsters, and corrupt cops. Joe Coughlin, the youngest son of a prominent Boston police captain, has long since turned his back on his strict and proper upbringing. Now having graduated from a childhood of petty theft to a career in the pay of the city’s most fearsome mobsters, Joe enjoys the spoils, thrills, and notoriety of being an outlaw.

Joe embarks on a dizzying journey up the ladder of organized crime that takes him from the flash of Jazz Age Boston to the sensual shimmer of Tampa’s Latin Quarter to the sizzling streets of Cuba. At once a sweeping love story and a compelling saga of revenge, it is a spellbinding tour de force of betrayal and redemption, music and murder, that brings fully to life a bygone era when sin was cause for celebration and vice was a national virtue.

Seriously, if there’s one thing I want to convince you of, it’s that you need to read Live by Night. I was on the edge of my seat with the first sentence: “Some years later, on a tugboat in the Gulf of Mexico, Joe Coughlin’s feet were placed in a tub of cement.” The book is full steam ahead from that first sentence, and doesn’t let up through the whole book.

Live by Night is epic, spanning most of Joe Coughlin’s adult life, from petty thief to mob leader. I found Coughlin to be a very nuanced character. Whether it was Lehane’s intention or not, I thought a lot about nature versus nurture while Coughlin struggled with his choices. Coughlin’s descent into being a gangster is one of those things that has so many small steps, so many things that you could say, Well, it’s just this one thing that won’t hurt anyone, that when Coughlin finally admits he’s a gangster, he’s really been that way for a while. And while he’s technically a bad guy, you’re rooting for him to triumph over the other gangsters. It felt a bit like rooting for Dexter.

I just loved this book. It was amazing, heart-pounding, gritty, and insightful. It never felt too long (in fact, I wouldn’t have minded if it had been a tad longer, not because anything felt rushed, but because the story was that good and I didn’t want it to end) and the characters’ emotions seemed to leap off the page.

As I mentioned above, I listened to the audiobook which was AMAZING. The narrator, Jim Frangione, made me realize why they say an audiobook is performed by so-and-so. Live by Night was a book that I felt like I couldn’t listen to the CDs fast enough. There are visuals that I have from this book that I expect will stay with me for a long time, specifically because of how the narrator performed the story.

Have I fallen all over myself to tell you how fantastic this book was? Because that’s what I’m doing: falling all over myself about how good this book is. Lehane makes me feel like a teenager in that I want to read all of his books, know all the trivia about him, and then write a bad poem about how much I love him. Unfortunately, I don’t have the time to properly obsess over authors, but at least he makes me feel like I would do that if I could. Who was the last author that inspired that in you?